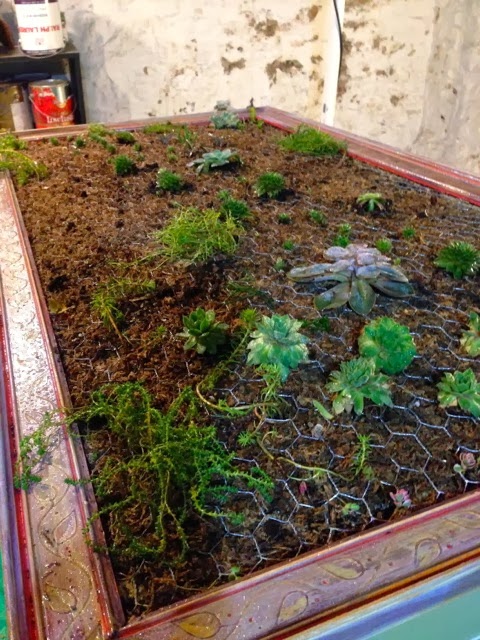 This year it’s a 5’x3′ hardy succulent frame made from scratch. I intend to hang it on the outside of the house under my kitchen window. There’s a large blank space there just begging to be filled. It is 5′ long because that is the width of the kitchen window.

Once this is up, there’s pretty much no more room outside walls in the backyard for hanging things. Between the house and fences, I’ve got an ornate grate, a collection of Garden Walk Buffalo posters, three mirrors, a fish head fountain. a diamond-shaped dwarf pear tree espalier, and now this succulent frame. The gallery walls are now full.

I’ll be asking for hardy succulents for Christmas this year (hint hint). I need to fill it in as full as I can. In addition to hardy succulents, I have some Scotch Moss that was growing elsewhere in the garden, and a few sedum.

I found a place online that sells hardy succulent plugs in large quantities and in many varieties and colors. I may buy a tray of those. In addition, Arrowhead Alpines has a decent selection, though not in larger quantities, and not all a lot that are hardy in my zone – but in some great colors! For now, I have grow lights over the frame. I have until April to collect and let root before it gets picked up, moved outside and hung.

5 comments on “My vertical hardy succulent frame from scratch”