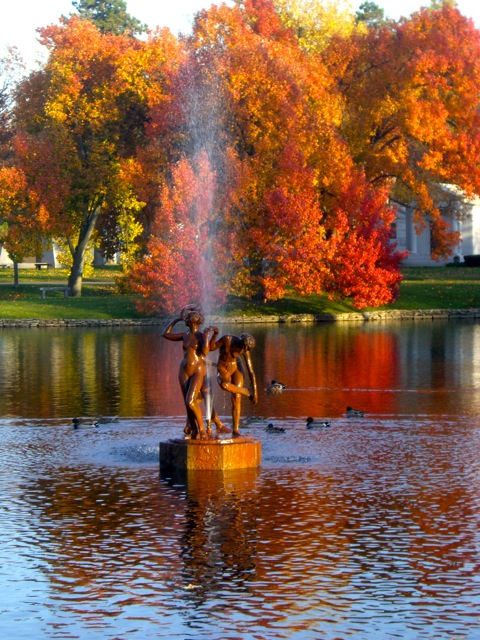 This past Saturday I took a Forest Lawn Cemetery tour along with 17 other friends, and Speedy the deer. He hung with us for about a half hour or more, just walking along following us. It was a spectacular fall day here in Buffalo, sunny, blue skies and in the 50s.

Forest Lawn, when it was established the countryside in 1849, was about 2.5 miles from downtown Buffalo, and modeled on Paris’ Père-Lachais, the world’s most famous cemetery. Now? It’s 269 acres in the land-locked heart of Buffalo and can still rival any cemetery in the world for beauty and significance.

It’s the largest arboretum in the area, as well as a natural habitat for any type of bird (from Canada geese to turkeys) that can be found in Western New York, as well as raccoons, fox, and Speedy the deer. Speedy’s been there for at least three years. No telling how he got in. It’s a natural habitat, so everything he needs to live well is in there. Except, obviously companionship. That may be why he hangs with the tour groups, walkers and joggers. He famously took on the role of protector for a egg-sitting Canada goose without a partner. That got coverage around the world.

Of course, I’m assuming S-p-e-e-d-y is the correct spelling. If it’s S-p-i-e-d-i-e, that’s a whole ‘nother thing. I’m from Binghamton, NY where a spiedie is a local food (much like Buffalo has the Chicken Wing ). A spiedie is marinated, grilled, skewered meat chunks of lamb, pork, beef, chicken, or — not unheard of — venison, served on buttered Italian bread. In Binghamton, there are Spiedie restaurants, competitions, jarred sauces sold in grocery stores, and an annual three-day Spiedie Festival. I hope Speedy isn’t destined to become a spiedie.

To the best of the Cemetery’s knowledge, there is only one deer. Some report having seen another, but Speedy here will loose his rack shortly, which may lead to the confusion of some having seeing a doe without a rack. Two deer have never been spotted together. 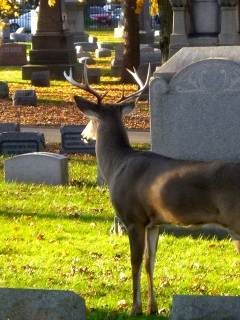 There are monuments and mausoleums created by some of the world’s most famous architects and artists, including Stanford White, Frank Lloyd Wright, Tiffany, Charles Cary Rumsey, Nicola Cantalamessa-Papotti, and Augustus Saint Gaudens. As a matter of fact, it’s the only place in the world where you can be buried in a Frank Lloyd Wright designed mausoleum.

Among the more than 160,000 residents are some you may have heard of — President Millard Filmore, superfreak Rick James, Aretha Franklin’s mom, Irving Berlin’s first wife, inventor of the air conditioner Willis Carrier, the first female architect (maybe in all of history) Louise Bethune and hundreds of other families and names anyone in Western New York would know – Knox, Depew, Waldon, Letchworth, Birge, Hengerer and more.

It also has veterans – from every U.S. conflict since, and including, the Revolutionary War. Many markers pre-date the opening of the cemetery because, as Buffalo grew, church-side grave yards were dug up and inhabitants were moved to Forest Lawn.

From the top photo you can see how beautiful areas of the Cemetery are. It’s a popular area for walkers, joggers and bike riders. It’s just a few blocks away from my house, so we’re over there on occasion. My wife jogs there often — it’s got plenty of rolling hills.

There’s still acres and acres left to be “planted,” if you were interested in spending your eternal life there. Plots are not any more expensive than any other cemetery — your major cost will depend on how elaborate you require your monument to be.

We took a basic hour-long walking tour with a friend, Nancy, as tour guide (only $10!). We covered almost a third of the cemetery and she shared great stories, some sweet, some romantic, some funny. She also explained where some of the customs and terms used in the funeral traditions come from. Forest Lawn also operates longer tours that include a shuttle bus and actors posing as some of the more famous residents. 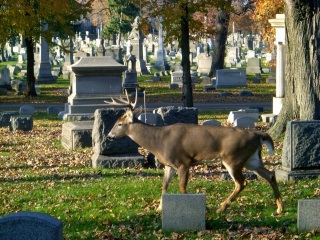 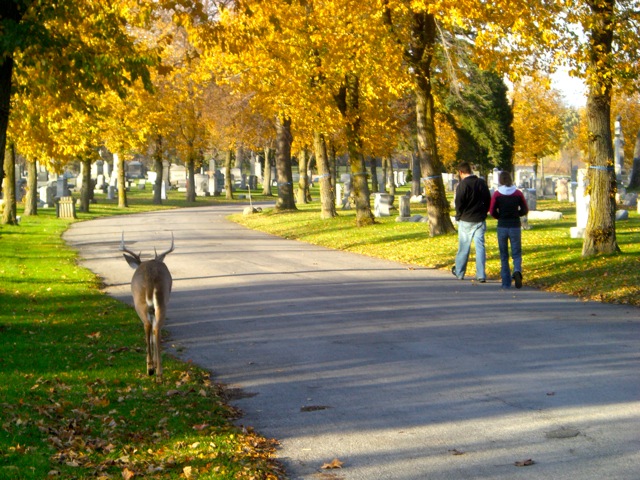 0 comments on “Cemetery tour with Speedy the deer”