Recently we had the chance to visit the Hortus Botanicus the botanical garden in Amsterdam. It’s a very nice botanical garden with all the trappings of a great horticultural tourist destination – even a café. It’s been around since 1638, making it one of the oldest botanical gardens in the world. I’ll post about it sometime soon. 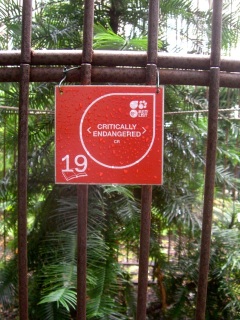 The one thing I didn’t expect to find in the middle of the metropolis of Amsterdam was one of the rarest plants on earth – the Wollemi Pine. I remember reading about this rare tree, thought to be extinct, when it was found in 1994. I saw it in Time magazine. The tree is now considered “Critically Endangered.”

The tree we saw (above) was enclosed by a fence, to thwart tree thieves. Poor thing looked like it was in jail.

Park ranger and ardent hiker, Australian David Noble came upon about 60 of them growing in a remote area of the Blue Mountains outside of Sidney. The trees had strange bark that looked like bubbles of chocolate, multiple trunks, ferny-looking leaves growing in spirals and were up to 125 feet tall.

Before then, the tree was only known through fossils as old as 90 million years. What fascinates me is that he recognized them as never having had seen them and found them to be thought of as extinct. If you ask me, they should be called the Noble Pine. Currently, there are around 100 growing in the wild.

It’s said that it was the equivalent of finding the a living dinosaur. They are thought to have populated the supercontinent that broke apart and formed all the continents. Going back to the Jurassic era, it’s probably the tree that T. Rex used to pee on.

They’re not for the meek. They’re big. At full size, they stand more than 80 ft tall, have up to one hundred trunks that span up to 3 ft across. They are slow growers. But they’re hardy – they can survive climates from 23 degrees F to 113 degrees F. They can also be grown as house plants, or in pots for patios. You an even make a Bonsai of them. That’s range.