When in Germany, about a month ago, we visited the Puppen und Spielzeug Museum (The Puppet & Doll Museum) in Rothenberg ob der Tauber. Under duress I might add. With a twelve-year-old daughter traveling through Europe for a week, you have to do things you wouldn’t do if you were traveling with a spouse. There’s also other things that you can’t do when you’re sharing hotel rooms with a twelve-year-old for the week, but I won’t go into those things here.

So at least the doll museum had garden toys. Here’s the first we saw. It was a garden store setting, complete with flowers, pots, planters, statuary, baskets, trees and more. I’ve always been intrigued by miniatures. So, apparently, are the Germans, did you catch my posts on the Miniature Train Museum in Hamburg, Germany? Here, here and here.

I never had a desire to play garden-center-shopkeeper when I was a kid. I enjoyed my Matchbox cars and full-sized GI Joes. I’m sure these, and the other play “environments” (which included a milliner, cobbler, bakery, butcher, Dr.’s office and a schoolroom, among others) were great fun — back when kids used their imaginations.

It was photographed through glass, so you’ll have to excuse some glare here and there. 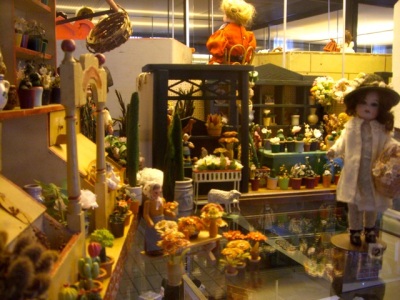