Okay, it’s really only one row of Rose of Sharon, but that wouldn’t have worked so well for the post title wordplay.

These are the the Rose of Sharon trees that separate my mother’s lake property (outside of Binghamton, NY) from her neighbors (my aunt & uncle). I missed peak flowering of these trees this year, though I’m told they were spectacular (and late!). 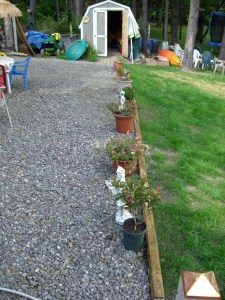 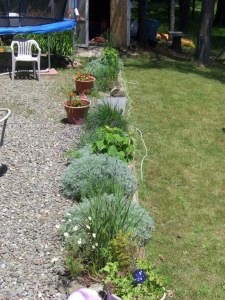 I put in a small “strip” garden for her last year, separating the gravel “patio” area of the yard and the grass that leads to the lake. My brother had put a wimpy landscape timber there to separate the two. I added a step down in the middle and symmetrical plantings on each side. It’s still on the wimpy side, but makes for a more definite division between the two. Being on a hill, neither patio nor yard are level. The stone is too large really for its purpose as a patio, but it was originally added to facilitate construction of the small cottage built last year.

The strip has all deer-proof (supposedly) plantings – silver mound, hibiscus, lavender and some grasses. I’m hoping to add to it a little each year with divided plants from my own garden. There’s plenty of room for more beds, though the stone you see is more than a foot deep – so it has to be dug out as best as possible and topsoil has to be added. Stone sucks to dig in. 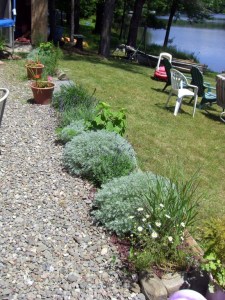 Different angle of the same thing.

Different angle of the same thing. Mom’s added decorative balls, which, surprisingly, end up in the lake when grandkids visit.

Lavender is very happy here and lasted the winter. That bodes well for its future.

Taller grasses cap the ends of the strip.

The view the plants have. Generally, the chairs are either full of people or not there – not looking so much like zombies patrolling the yard. It was a busy weekend.

0 comments on “Rows of sharin’”