The window boxes on the front of my house are filled mostly with coleus, Persian shield and potato vines. Right now it looks the best it’s looked all year.

The window boxes (there’re two boxes side-by-side, giving the impression of one long window box) are made of recycled plastic deck boards, the kind of stuff you’d build a deck with. I built them a couple years ago. They were a bit more expensive with the plastic deck stuff. I knew, built of even pressure treated wood, they’d rot and get weak at points and I’d have to just rebuild them. And pre-made boxes would not fit the width of the window, nor be the right scale for the house. The plastic ones are so wimpy, and can’t easily be painted to match the house colors.

I’d love to put a window box on that very top, small, oval-topped, attic window, but I know I won’t be good about watering it. And nothing looks worse than dead plants in a box.

From the office window. Blends in nicely from this view of the front garden. There are also more boxes (the cheap plastic kind) attached to the railing of the front porch with the same coleus, Persian shield & potato vines..

They’re put together with bolts. No nails. Nails would just pull from all the different weights and forces on such heavy planters. They’re up there on cleats that are solidly attached to the house. The brackets you see are purely decorative.

The flaw in my plan? That recycled plastic wood is friggin’ heavy! It took all my might to get both planters up there. I did it though, all on my own. Inch by inch up a ladder. Twice. 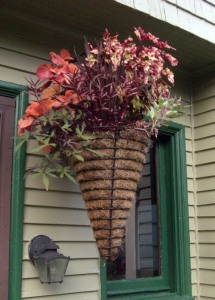 Cone baskets on either side of the door. A couple neighbors up the street had their front porch baskets stolen. Idiot robbers tried selling them to people down our end of the street. I was paranoid someone would steal these, so they’re pretty wrapped with wires on their hanging brackets. Whoever wants to steal them will have some work to do to un-engage them from their holders.

I like coleus because I get constant color without having to worry about bloom times or deadheading. And they are pretty transparent about when they need water. And they bounce back quickly if I haven’t watered them for a while. Watering is pretty easy from my office window. Overflow usually gets the baskets below a good soaking. And any mail in the mailbox.

The cone-shaped planters just below the window boxes on either side of the door are planted with the same things, with the addition of a brown spiky grass for even more height. 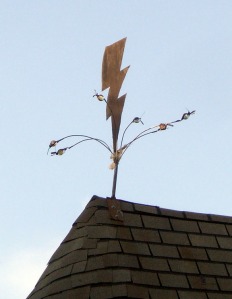 The lightning-shaped lightning rod is now a few years old. I drew the shape of the lightning and a local sculptor built it for me. Hard to tell here, but at the ends of the splayed wires are very large colored glass marbles.

In the last three years we’ve had a new roof, new windows, new lightning rod, and this summer, a new paint job. Same color green, but with the addition of a dark green & the purple. Wish we’d pushed the purple a bit more. I may go back next summer and paint the window boxes and a few other surfaces in the purple color.

Do you have window boxes? What’s your experience?

0 comments on “Window box at peak”