Wouldn’t it be great if all houses came with built in planters – even better if they came with built-in plumbing for watering and draining? That’s what Frank Lloyd Wright thought–in 1904. Here are shots of built-in window boxes, large urns and bricked-in beds that Wright incorporated into four of his eight Buffalo structures. I’ll update on these gardens as they progress through the summer, and the years. 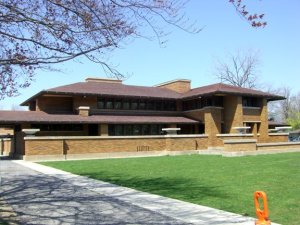 Wright’s signature Prairie-style home, he considered this his “opus” and kept an image of it over his desk for most of his days. Completed in 1904, the 29,080 sq. ft. home is now being restored to his 1904 vision with extensive plans and letters between Wright and the industrialist Darwin Martin, among the nation’s wealthiest men at the turn of the century. The neighborhood it’s in was laid out by Frederick Law Olmsted. This is very early in the season, so not much is planted yet. I’ve met the facilities manager for the property. He owns a garden center locally. He can’t wait to get to the restoration of the grounds. They have more to do on the house first though. 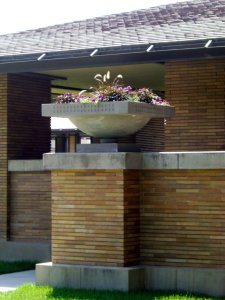 There are dozens of these large bowl planters around the estate. 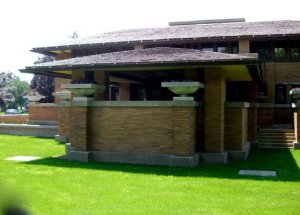 Patio outside the living room.

Here you can see the watering device in the middle of the planter. There’s also a drainage system for each planter.

The main entrance of the house was not too welcoming. It’s hidden from the street.

Inside the Conservatory. This self-watering cathedral to plants was Wright’s answer to Martin’s request for a small greenhouse to grow annuals for the property.

Close-up of Nike of Samothrace (Winged Victory) in the Conservatory. When you walk in the front door of the house, 180 feet away, you can see this through the Pergola. 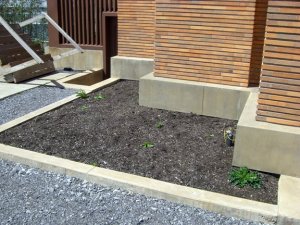 Around much of the base of the house & carriage house are these built-in garden areas. 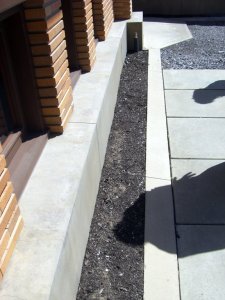 Even the thinnest strip was planned for plantings.

Nothing to do with plants, but in order to get the long horizontal look Wright wanted for his Prairie Houses, he had specified Roman brick, which is narrower and longer than our conventional brick. He also had the masons flush the mortar on the vertical joints and do a deep trowel cut on the horizontal joints. In addition, he had the masons use dye on the vertical joints to match the color of the brick to further the horizontal look. I can still hear all the masons grumbling.

The Barton House
Built on the same grounds as the Martin house, this was the home of Darwin Martin’s sister. It also represented a “less expensive,” but yet upper class, version of the Martin House. It was a test project by Martin to see if he could work with Wright. It was estimated at $4,500. When built, its costs came in around $14,000. They worked well together and remained friends and the Martin house was started, despite the cost overruns. Many of its design thoughts throughout were carried on in the larger Martin House in a grander and more exquisite manner. 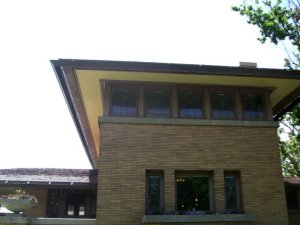 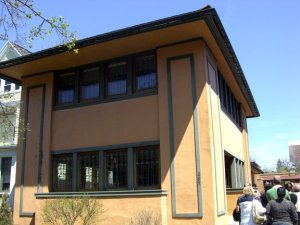 The Gardener’s Cottage
Built on the same grounds as the Martin house, this was the home of the gardener for the property. This house originally cost $4,500 to design & build. There is a new addition on the back of the house which increases the space significantly, and seamlessly–fortunately it was designed by the home’s owner at the time–a wood-worker and fan of Wright. It’s won awards for it’s Wright-ian qualities & craftsmanship. The home was in private hands, until recently, when it went on the market for $500,000. The publisher (and past editor) of the Buffalo News and his wife, Stan & Judith Lipsey, purchased the home and donated it to the Martin House Complex. Nice gift. I worked with Judy for years in one of the ad agencies in which I worked. Thanks for the nice gift Judy!

Along the side of the cottage, under the windows and two back planters (from the new addition) straddle the back steps.

The planters are all the same height, forming a horizontal ribbon around the house.

Close up of the Gardener’s Cottage window planter.

Just south of Buffalo, in Derby, on a cliff overlooking Lake Erie, sits this summer house commissioned by Darwin Martin’s wife, Isabelle. Built between 1926-9, it was used through the 1940s by the family. It was built from stone from the cliffs below–part of Frank’s philosophy of using native, natural building materials. Volunteers canvassed the beach below the house trying to match stone to repair disturbed walls and stone fences on the property. On a clear day, you can see the mist from Niagara Falls across the lake. There are plans to eventually recreate all the gardens originally planned for this site by Wright. The house is structurally sound but needs much restoration.

Lakefront garden area. Originally planned by Wright to be a pool with a waterfall going over the cliff. Wouldn’t that have been wild? The cliff is deteriorating. Part of the wall that was there has fallen down to the beach. 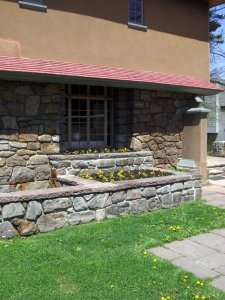 In the Martin House, Wright had corner windows that pushed toward the corners of the house. Here, at Graycliff, you can see in this garden room, he was able to get glass into the corners of the house, as the weight-bearing walls were interior ones that cantilevered this garden room. he perfected this “breaking of the box” at Falling Water where he created corners that were glass-on-glass.

15 comments on “Built-in planters. Wright had it right.”