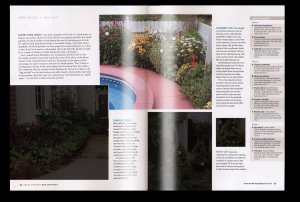 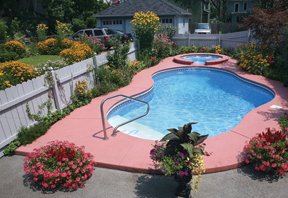 What you won’t see in the magazine article: Tom’s entire pool. Which pretty much takes up his entire narrow lot.

279 Richmond, the garden of Tom, a dedicated Garden Walk Buffalo committee member, appears in an article titled “Small Gardens.” The photo used in the article is above. The photo in the magazine features just a tiny little section of Tom’s intricately-planted area around his pool. To the right, is a photo of the whole pool area (taken by Garden Walk photographer Don Zinteck). With just tiny spaces to plant in along the pool edge, it is lushly planted. On the left, outside the pool fence, is his neighbor’s yard, which he’s also contributed pants to, and helped maintain. This is a narrow city back yard and with the curvy pool and well-thought-out plants, it looks much larger than it is. You can visit this magazine-worthy garden on Garden Walk in July – bring your suit! 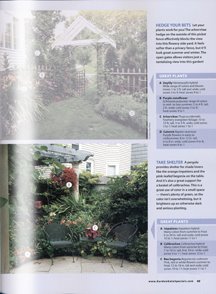 This narrow city lot has a pergola eating area; the little sitting area, shown here; and also a way cool water fall, amongst other great designs.

39 Granger Place appears in the article, “All about personal spaces.” It’s another popular stop during Garden Walk. Their garden has been featured before in the regular monthly Garden Gate magazine. You can see my post about that article here. They, too, have a very narrow yard, subdivided into cozy areas, most with dense shade. It is thickly planted by two gardeners with an eye for detail. Or is it eyes for details? I’m not sure, but there’s two sets of eyes, one belonging to Tom, an interior designer, the other to Carol, an architect. Being in those professions, you can imagine how the two of them can torment themselves over the design of the garden. 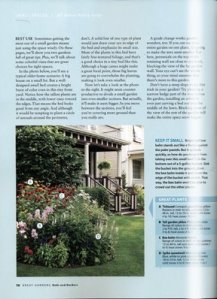 This garden has gotten more coverage in national gardening magazines than almost any other here in Buffalo.

72 Lancaster Avenue, also featured in the Garden Gate December 08 issue, also appears in the article, “All about living large.” This garden has also appeared on the cover of the Jan/Feb 08 Garden Gate magazine cover and the Early Summer 2007 cover of People Places Plants. This garden belongs to Alec, but it’s at his parent’s house, which just happens to be on my street. Next time I’m by this garden, I just may take my camera so you can see what a magazine-worthy garden looks like in the winter-time.

Great Garden Beds & Borders is a Garden Gate magazine specialty publication and can be found in most bookstores nationally, as well as most Wegmans grocery stores locally. Photos in the article are by Garden Gate senior photographer David C. McClure.

3 comments on “More Buffalo gardens in a national magazine”