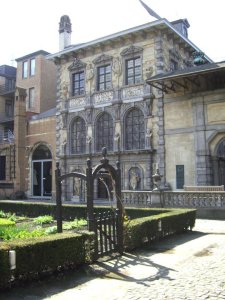 On Wapper Street, Antwerp, Belgium, Peter Paul Rubens’ home (Rubenshuis) is open as a museum. When he bought the house in 1660, after having lived in Italy for a spell, he added a palazzo to the already Italianate-style house. The house and garden were restored, after 1937, using engravings made between 1684-92. It is an enclosed renaissance garden, with straight walks and parterres bounded by yew hedges.

Rubens was a knighted (by both England & Spain) diplomat and traveled throughout Europe – most notably living in Italy for a spell and spending much time in France and England. Along the way he collected everything from statuary, paintings – and plants!

The garden has many structural features, like fencing, arbors, fountains, pergola and a pavilion all surrounded by Italian poplars. The garden is not the exact replica of what Rubens had. From what I can tell, it seems to be an educated guess based on gardens of the time and from Rubens etchings and one painting in particular of he and his wife called, Garden Walk (I’m not makin’ that up!). 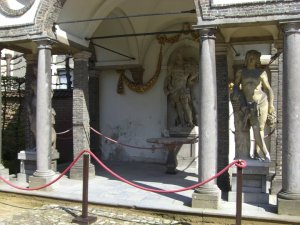 In 2001, for the first time ever, cultivated plants that were correct for the Rubens period were planted: the carnation (Dianthus plumarius) “Rubens Palet” and 10 historic selections of the Andes potato (Solanum tuberosum ssp. andygena), an ornamental potato introduced in Europe by the end of the 16th century. Yes, he was among the first to bring the potato (as an ornamental plant) to Europe.

The Garden Walk, Peter Paul Rubens, c. 1630. That is Rubens at 51 and his 16-year-0ld bride and his son from his previous marriage walking in his own garden. You can see the pavilion on the left and a gate leading into a section of the garden. Much of the garden was restored based on this image. 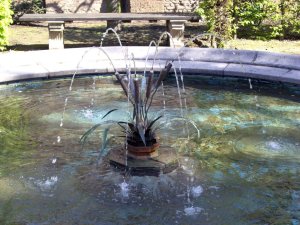 The outside of the house, facing Wapper Street.

3 comments on “A Ruben-esque Garden”